The exhibition “Stendhal Syndrome” at Circle Culture Gallery marks a point of culmination in the work of Icelandic artist Katrin Fridriks. Its title derives from her installation “Perception of the Stendhal Syndrome”. The expansive installation at the same time constitutes the centerpiece of the exhibition and refers to Fridriks’ constitutive artistic conception to approach fundamental questions in life by way of providing a compelling aesthetic experience. 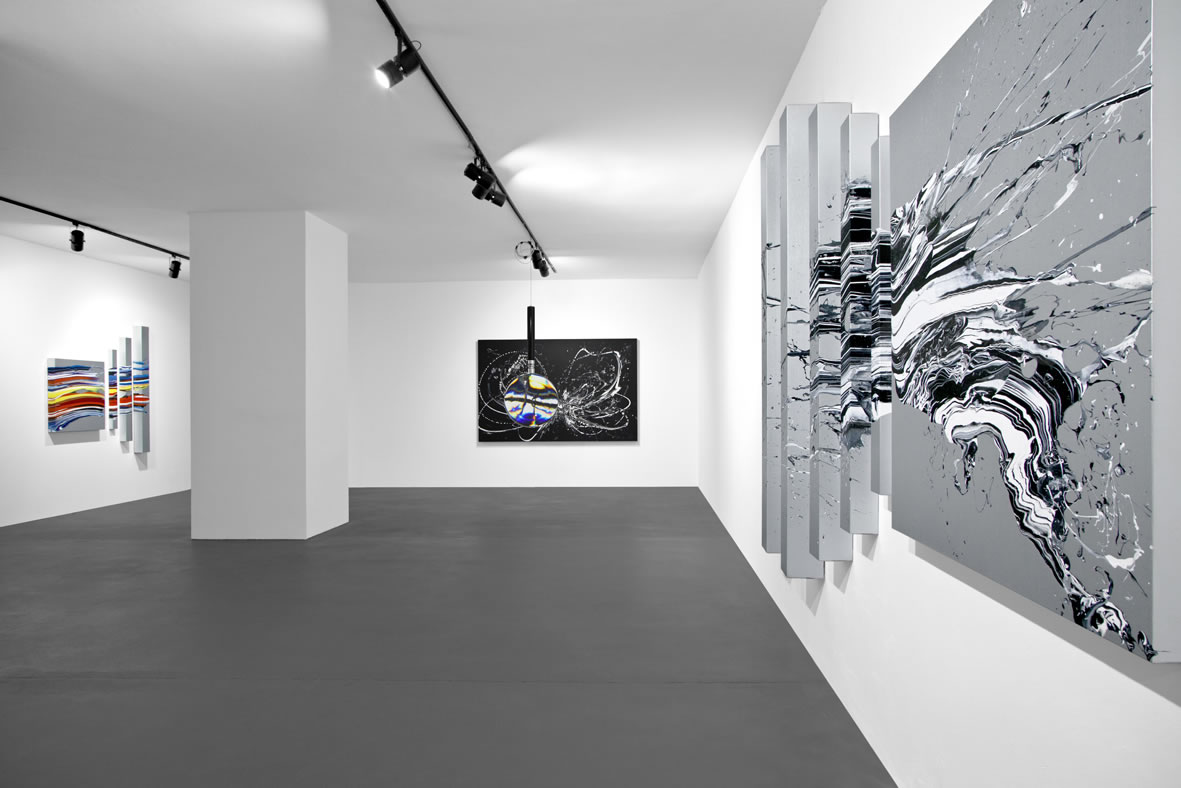 Fridriks has developed an outstanding painting technique that overcomes the limits of the medium of painting and expands it by the category of time: Thus, looking at one of Fridriks’ large scale paintings, evokes a raised level of awareness within the beholder. Although the paintings result from an abstract and intuitive process, they evoke associative images, such as wild creatures – or even the landscape of Fridriks’ native country, Iceland. 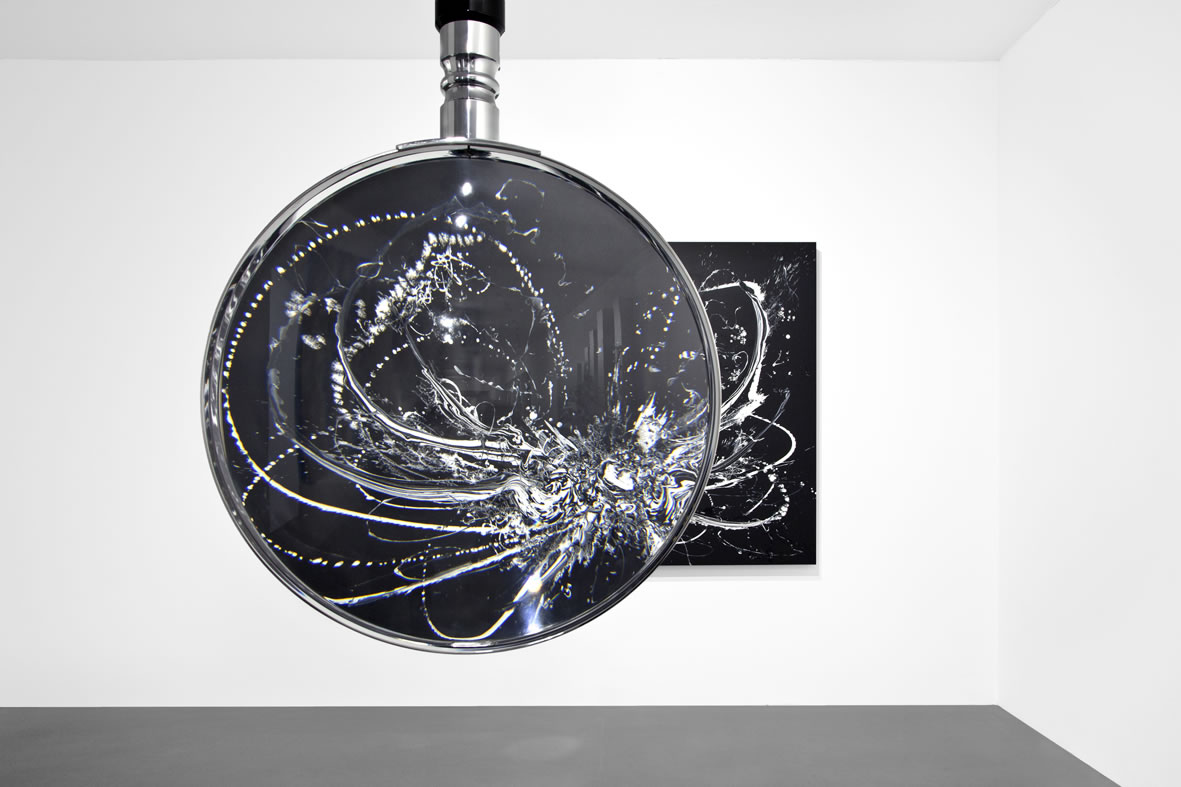 In her works Fridriks unites minimal and expressive gestures to create an explosive effect: The dichotomy of only white paint on black grounding paired with her genuine style provoke the impression of paint splashing and swirling over the edges of the canvas – and into the space of the beholder. Rather than capturing a moment in time, the painting epitomizes the moment of an eruption. On a more abstract level, this essentially relates to the evolution of the universe from a singularity, and the origin of all being: It is this mode of energy that the paintings convey. 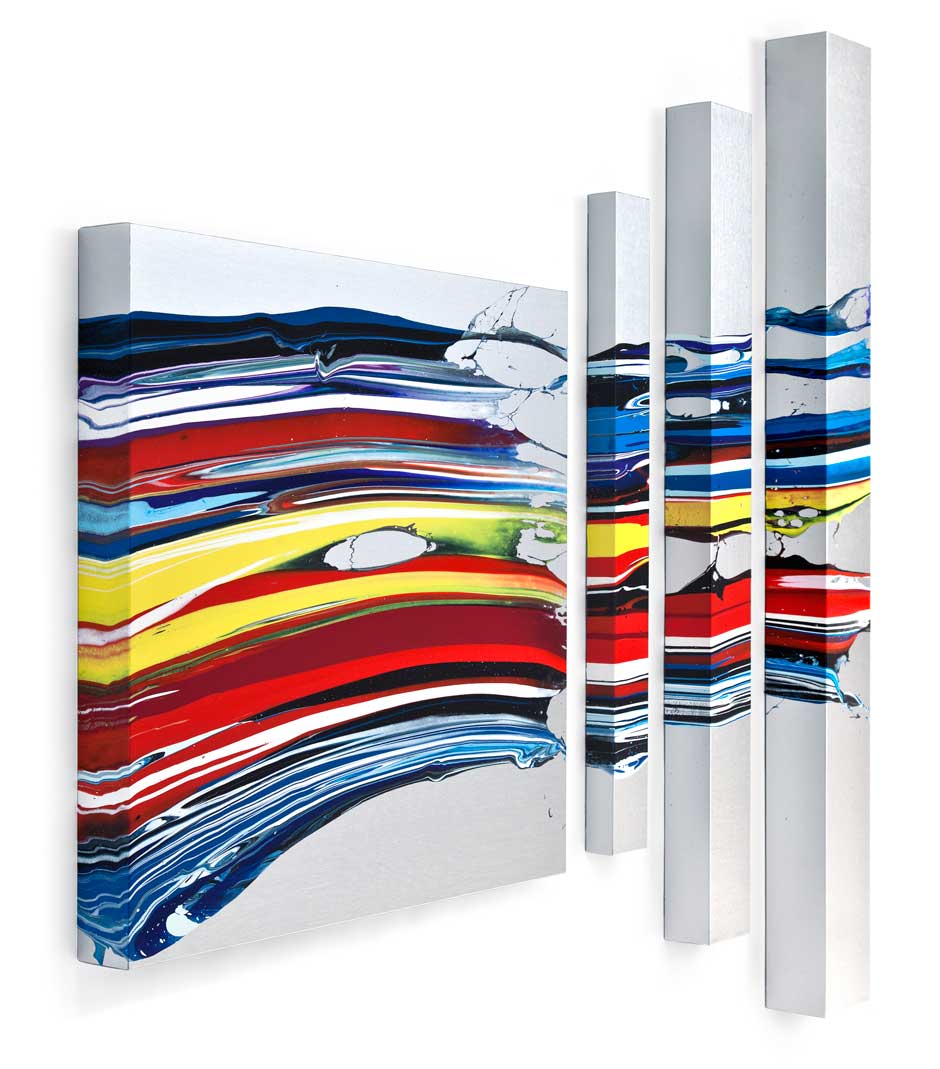 The installation “Perception of the Stendhal Syndrome” comprises one of her large-scale paintings from the series “Gene & Ethics” (2,80 x 1,80 m) and a custom-made sculptural magnifying glass of 1,70 m height, suspended from the ceiling.

Although located at the very end of the gallery space, the magnifying glass contains the stunning effect of bringing to the fore smallest details of the comprehensive painting, which become ephemeral pictures within the round framing of the lens. Each visitor will perceive a completely unique image when approaching the work, as every slightest move generates an entirely new perception. 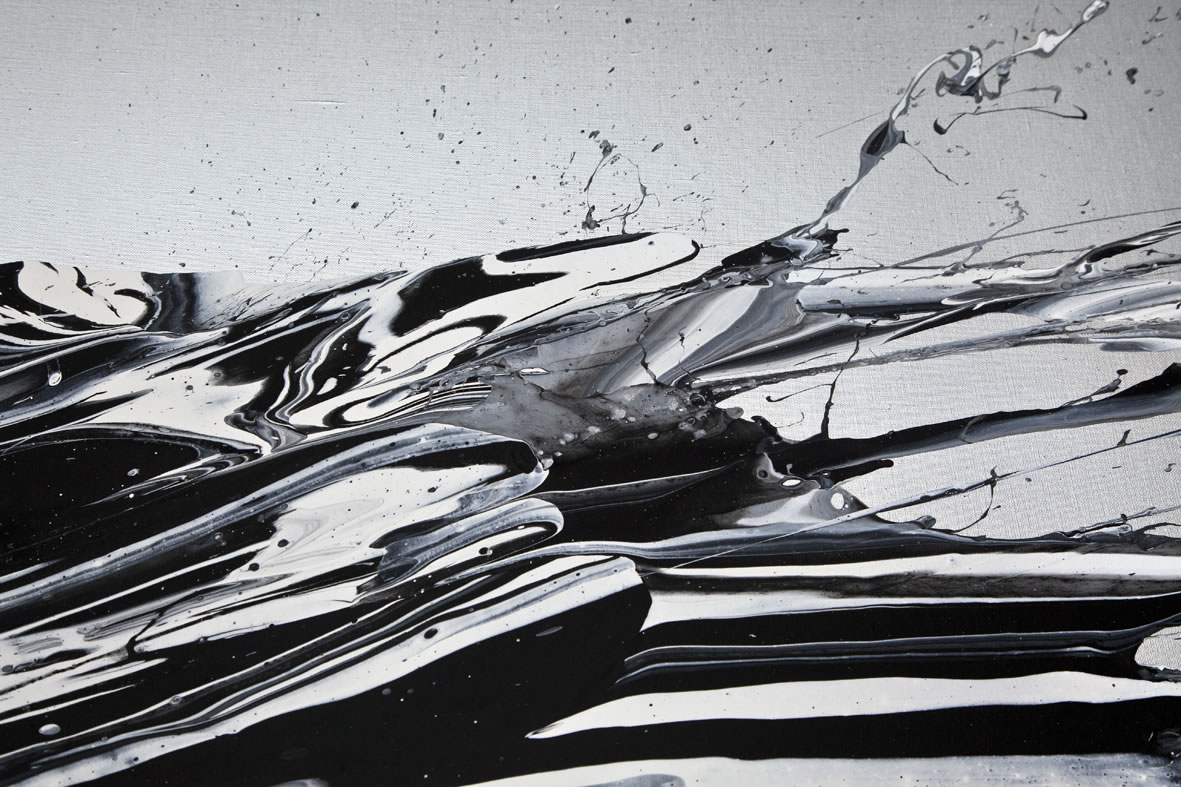 The installation thus provides an experience of her work that simultaneously allows for a macro perspective and micro perspective of the painting, thereby revealing the wide scope of the mastery of Fridriks’ skills. It is the literally puzzling and elusive nature of this experience that lies at the center of Fridriks’ interest, as each beholder is forced to reverberate his/her own position in regard to the work and within the actual space, instantaneously.

In fact, the exhibition title “Stendhal Syndrome” itself refers to a medical condition, which is associated with an overwhelming aesthetic experience while contemplating a work of art.
It was first described by the young writer Marie-Henri Beylem under the pen-name Stendhal, who underwent a seizure after visiting the Basilica of Santa Croce in Florence in 1817: „Deep in the contemplation of sublime beauty, I reached the emotional point where we experience heavenly sensations. When I left Santa Croce, I had heart palpitations. 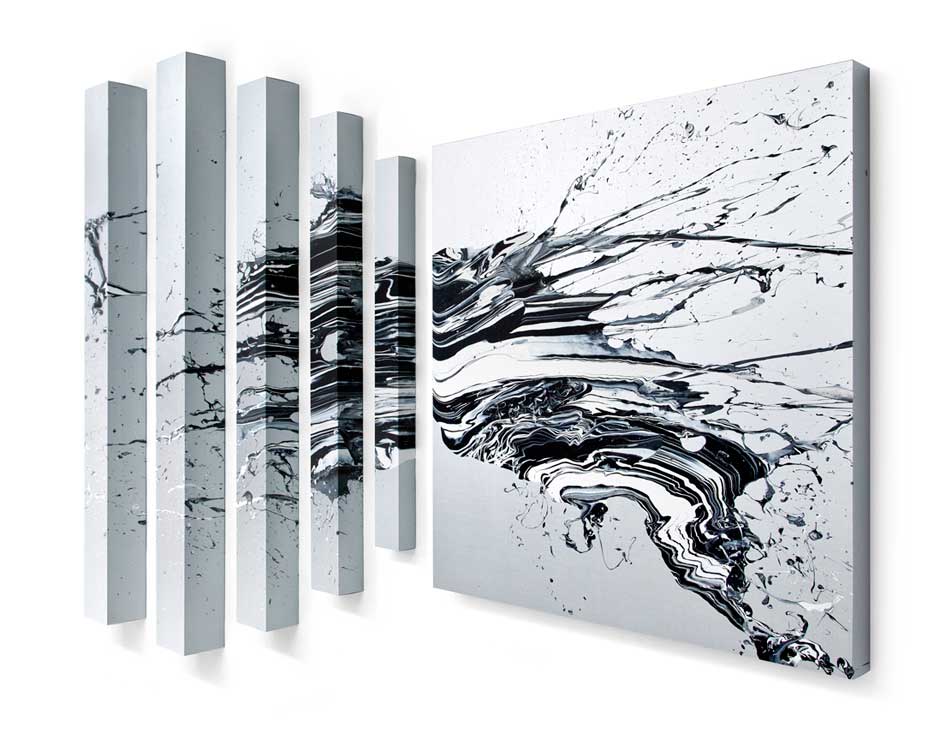 The life flowed out of me and I was afraid I would fall.“ With her installation, Fridriks refers to the possibility of such an intensive aesthetic experience evoked by the impact of a single work of art.

Fridriks has developed her specific technique, deriving from chemical and technical experiments with different qualities of paint and a choreographical act of painting. It is the interplay of the medium, the timing and the artists’ body moving around a canvas on the floor that encompasses the fluid and organic quality of her paintings. 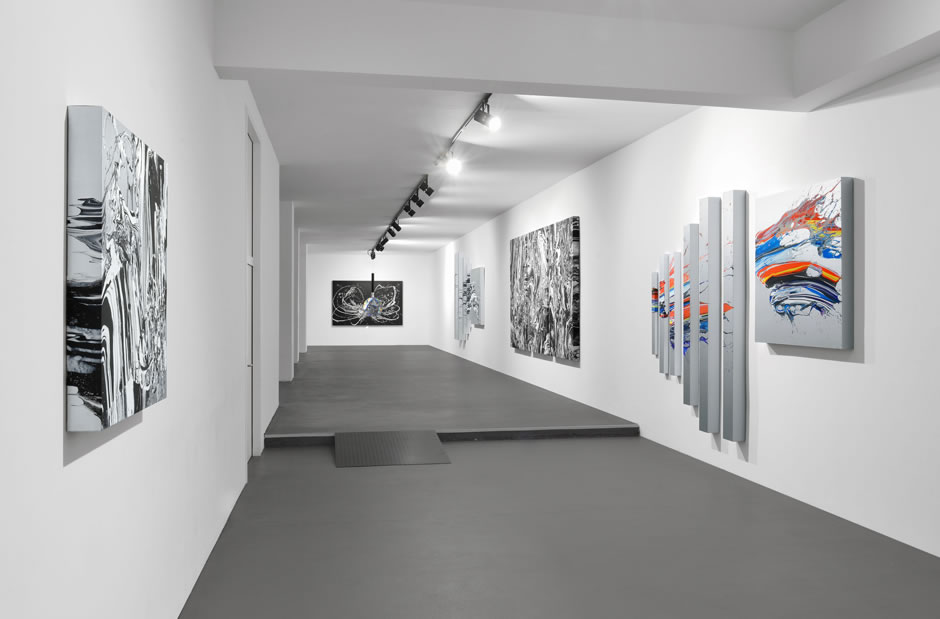 All the presented works have in common that they virtually capture the act of painting itself. A strategy that Fridriks refines in her series “Silver Awareness”, which includes a canvas as thick as 20 cm with a reflective silver grounding. The paint materializes before one’s eyes and the picture thus becomes an object. 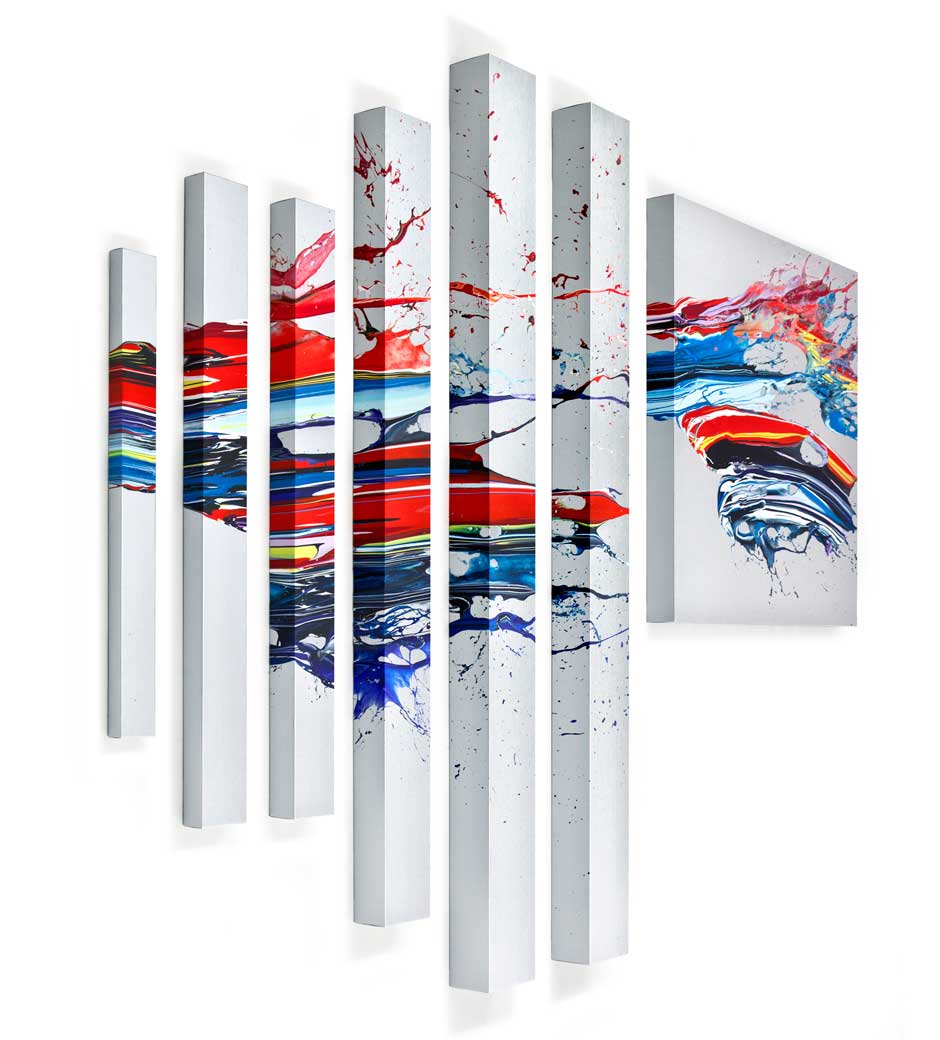 For more than one decade, Katrin Fridriks has experimented with the single elements of painting and consequently formed her genuine painting technique to contemplate and express existential questions in life. These experiments also include her early land art pieces, such as “Energy Flow” (2002), and have recently developed into architectural compositions with canvases, as in “Riding Awareness” (2013), as well as into her most recent engagement with enlarging her characteristic dripping effects, as in her work “Noble Messenger” (2014). 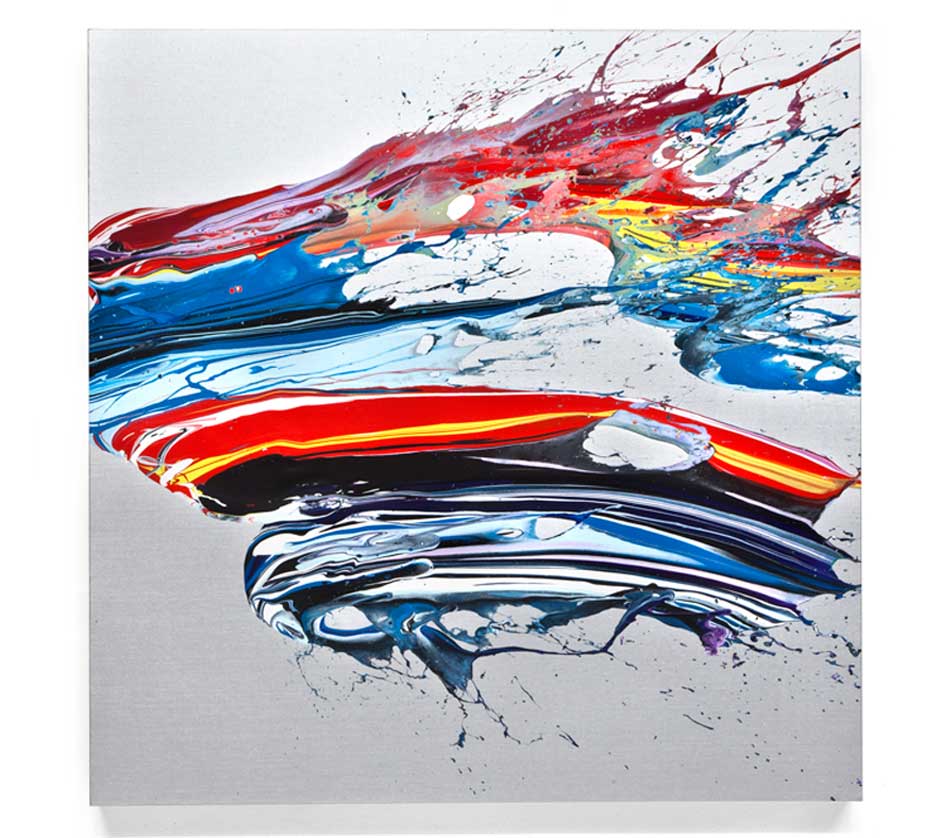 Katrin Fridriks has been invited to participate in the Biennale di Venezia 2015 in the context of the Global Art Affairs Foundation at Palazzo Bembo. The exhibition StendhalSyndrome incorporates an installation referring to the presentation in Venice.